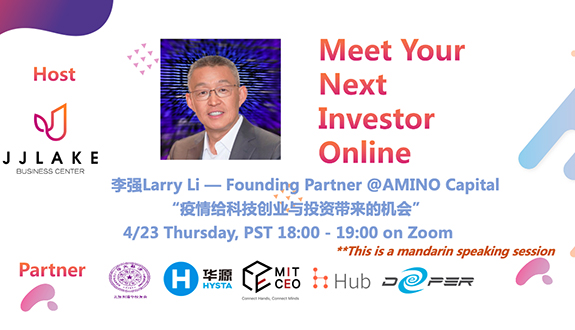 *THIS IS A MANDARIN SESSION!

AMINO Capital is a venture firm based in Palo Alto, focusing on seed to growth-stage investments in big data and data-driven technologies, including over 150 high growth startups, with 17 successful exits, 6 Unicorns, and over 17 startups with over $100 million valuation, including Assemblage (acquired by Cisco), Orbeus (acquired by Amazon), Ozlo (acquired by Facebook), GrokStyle (acquired by Facebook), Woomoo (acquired by Priceline), Contastic (acquired by Sugar CRM), Mobike (acquired by Meituan/Tencent), Evertoon (Acquired by Niantic | PokemonGo), Yiqixie (Acquired by Kuaishou/Tencent), Lvl5 (Acquired by Doordash), Nitrio (Acquired by Showpad), Chime Bank, Voyage, AIFI.io, Vicarious, Paperspace, Skycatch, Skuchain, Webflow and Grail. We are also early backers of next generation blockchain protocol since 2014, and led the seed and A round of String Labs, which incubated one the most anticipated public chain, DFINITY, currently reported to be $2B valuation. We participated in investment of OASIS, 0x, and OmiseGo, which later became known as the first blockchain unicorn in 2017.